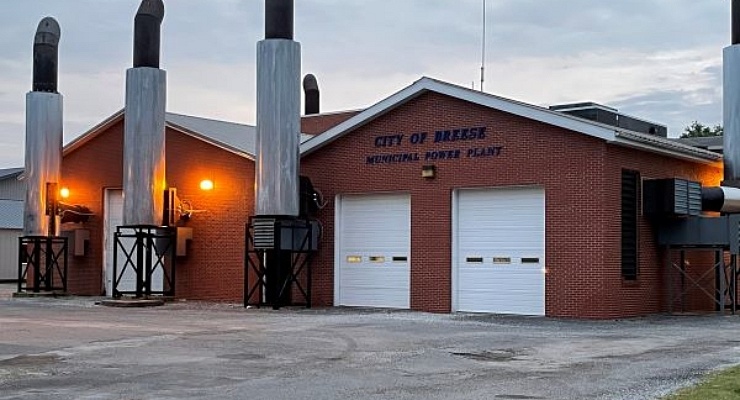 The History of Breese Utilities:

Electric service for the citizens of Breese is supplied by a municipally owned utility which was originally built in 1906 and consisted of 3 100 horsepower boilers which were hand fired, and 2 Russel steam engines each direct connected to an alternating current generator having a capacity of 100 kilowatts (KW).

Charles Williams was appointed electrician at a salary of $75 a month. The light rate was 9 cents a kilowatt-hour which was lowered to 5 cents in 1908. In that year George Carr became superintendent at a pay of $50 a month.

For a short while in 1920 electric power was furnished to Aviston, but was discontinued when the mill in Aviston needed more power for a motor they purchased.

The demand for electric power continued to grow so there was an addition to the power plant to make room for another generator in 1953. After completion of the addition, an 8 cylinder Cooper-Bessemer Corporation turbocharged diesel engine direct connected to 1000 KW. Elliot Company generator was installed and is presently used for peaking and standby service.

In 1955 a Keeler Company water tube boiler, with superheater designed to operate at a pressure of 300 psi, 735 degrees F. steam temperature, when generating 17,500 pounds of steam per hour, was placed in operation in March of 1955.

Later in 1959, a new Keeler water tube boiler with 35,000 pounds of steam capacity per hour was installed. Along with a the boiler a 2000 KW steam turbine generator with condenser and auxiliary equipment was installed. This generator was purchased from the city of Flora for the sum of $25,000 and is still in use today.

An electrical fire in the main switchboard at 1:45 a.m. on December 11, 1963 caused a considerable amount of damage to the interior of the generating room. The city was without electrical service until 4 p.m. of that day, when the switchgear of the Cooper-Bessemer engine was repaired. With the assistance of the Mayor an emergency generating unit mounted on a railcar was sent to the city of Breese from the U.S. Navy in Great Lakes, IL. This unit was used until the main generating unit was put back in service.

In 1964 a new electrical substation was built to the west of the plant. All the high voltage switchgear was moved out in the substation. In the following year 69,000 volt 3 phase transmission line was built between the city of Breese and the city of Carlyle for emergency power supply.

December of 1964 brought another fire at the power plant which destroyed two generator panels and damaged the roof badly enough to have it replaced. Apparently this fire was caused by lightning.

Electrical demand caused the need for more generating capability. In 1968 a 3000 KW. 12 cylinder duel fuel Worthington engine and generator was installed. This unit can use #2 fuel oil and/or natural gas for combustion.

Ten years went by before the installation of the next generating unit. In 1991 an E.M.D. 20 cylinder diesel engine connected to a 2500 KW. generator was installed.  In 1996 a new 69,000 volt transmission line was built from the city of Breese south to Highline Road. Along with the new line there was an addition to the substation for high voltage switching. In 1997, 2008 and 2014 EMD 20 cycle diesel 2500 kw generators were installed for a total generation capacity of 17,000 kw’s.